Oct 18      The Centrality of Violence in Native American History

Oct 19      A Fateful Embrace: Settler Colonialism and Genocide Studies in the Twenty-First Century 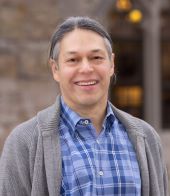 Ned Blackhawk is the Randolph W. Townsend, Jr. Professor of History and American Studies at Yale, where he serves as the faculty coordinator for the Yale Group for the Study of Native America, the Yale Indigenous Performing Arts Program, and the Native American Language Project, among other projects.

Blackhawk graduated from McGill University with a degree in Honours History in 1992 and attended under the auspices of the Jay Treaty of 1794.

An enrolled member of the Te-Moak Tribe of Western Shoshone Indians of Nevada, he is the author of the award-winning history of the American Great Basin, Violence over the Land: Indians and Empires in the Early American West (Harvard University Press, 2006). His recent publications can be found in the American Historical Review; Reviews in American History, the New York Times Book Review, and The Art of Native America: The Charles and Valerie Diker Collection. His coauthored publications include a special issue of Daedalus: Journal of the American Academy of Arts and Sciences (2018); a “Brief for Amici Curiae Historians and Legal Scholars” (2015) to the Supreme Court in Dollar General Corp. v. Mississippi Band of Choctaw Indians; and the coedited anthology Indigenous Visions: Rediscovering the World of Franz Boas (Yale University Press, 2018), which won the 2019 Modernist Studies Association best anthology prize. He has two works forthcoming, including Indigenous Genocides and Settler Colonialism, the second volume of the Cambridge World History of Genocide, and The Rediscovery of America: American Indians and the Unmaking of U.S. History (Yale University Press).

About the Joanne Goodman Lecture Series

Presented by the Department of History

Every autumn a distinguished historian is invited to Western University to deliver three public lectures on consecutive afternoons to students, faculty and members of the London community. The lecture series was established in 1975 by the Honourable Edwin A. Goodman and his family of Toronto to perpetuate the memory of their beloved elder daughter, a second year History student who died in a highway accident in April of that year.

The theme of the series is the history of the Atlantic Triangle (Canada, the United States and the United Kingdom). The first lectures were given in 1976 by the leading Canadian military historian, Colonel Charles Stacey, on 'Mackenzie King and the Atlantic Triangle'. Occasionally there have been lectures outside the general framework. In 1995, for example, the topic was 'The Birth of the "New" South Africa', tracing the collapse of apartheid and the construction of a new political and social system since 1990, by Rodney Davenport, a South African historian and opponent of apartheid.

The endowment also supports publication so that these important lectures may be shared by a readership well beyond the immediate audience at Western University. Most of the lectures have been published as books, either in a form similar to lectures or as part of a larger work. The lectures are widely recognized as being the most important history lecture series in Canada. The invitation to deliver them and the publications that result are highly regarded in this country and around the world.

Contact the History Department at history-inquiries@uwo.ca if you require information in an alternate format, or if any other arrangements can make this event accessible to you. For a campus accessibility map please visit: http://www.accessibility.uwo.ca/resources/maps/index.html.